Last time we recapped our tournament of iconic cameras, the first round was wrapping up. Now, the competition's done and a winner's been crowned, so let's go through and relive all the best moments, the major upsets and highlights. Thanks again to all those that voted on our Instagram page, your passion for these cameras really came through in the clutch.

The Argus was clearly overmatched, meeting the legendary Canon SLR firing on all pistons.

Nikon's original F came out the gates strong against the Bessa, laying waste to the classic Voigtlander.

Experience plays a big part in the tournament, and the vintage Brownie's got it in spades.

The Minolta Maxxum 7000 had its hands full with the panoramic Widelux, narrowly escaping with a win.

No upset here, as the Olympus made quick work of the plastic/fantastic Holga.

Winner: Pentax Spotmatic (57% of the vote)

The Deardorf allowed the Pentax to hit all its spots and ended up paying dearly for it.

And then there were sixteen—all of them hungry for victory, setting the table for a feast.

In its first tough matchup for the #1 seed, the Leica took care of business against the Bronica, and a nation of medium format true believers wept.

In the biggest upset of the tournament, the space-walking, #2-seeded Hasselblad was brought back to Earth by the feisty German TLR.

The AE-1 continued its path to glory, easily taking out the Sinar 4x5 in a rout.

A much-anticipated match-up didn't disappoint, but at the buzzer, the Nikon was already looking ahead to its next game.

A close match on paper, but the classic rangefinder dispatched the box camera with no problem.

The Sony A7 was the last hope for digitals, but it stood no chance against the time-honored Olympus SLR.

The Minolta drew a favorable opponent who had perhaps over-performed in the early rounds, so it easily made it through another game.

The Mamiya continued its impressive winning streak by taking out the mighty Spotmatic with over 2/3 of the vote.

And then there were eight—a mix of favorites and some surprising contenders to the throne.

The battle of the rangefinders that we had all expected proved to be a tough-fought game, but in the end, the Leica III rose victorious.

The medium format Rollei impressed again, taking out the Minolta without even breaking a sweat.

These two classic SLRs finally went head-to-head and it did not disappoint—the Canon had to fight hard all the way to the end to pull this one off.

Again, the Nikon F looked impressive rolling over the competition—this time over the Mamiya, whose tournament comes to an end. 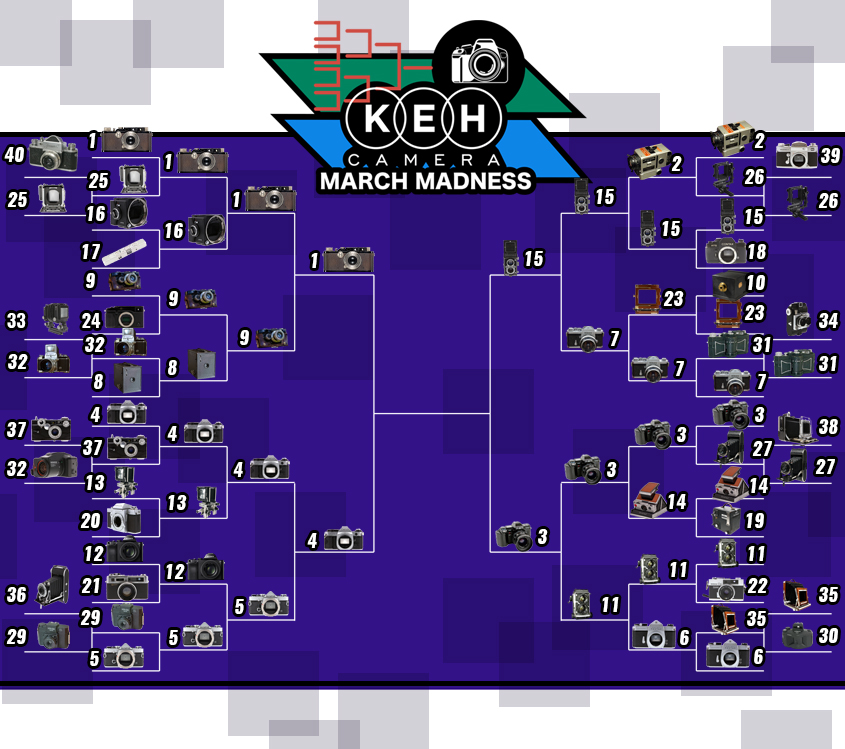 And with that, there were four cameras left, three top-seeds and a fiery dark horse contender.

It all came down to this—the big game for all the marbles. Two icons battling it out for eternal life and bragging rights. Who would cut the nets at the end of this one?

It was a championship game worthy of its own chapter in the history books, and when time ran out, the Nikon F pulled out the clutch win.

What a terrific tournament! We hope you enjoyed playing along on our Instagram. You made it special and ultimately, we hope you're happy with the results. If not, there's always next year.

Why We Love Third-Party Lenses