Hi everyone! My name is Brittney and I’m super excited to be featured on the KEH blog. I’m excited to share with you all my journey into film-making and photography and I hope that I can inspire you all!

Tell us about yourself!

Hey guys, my name is Brittney Janae and I’m from St. Louis, Missouri. I’ve always been a creative. I love skating, dancing, I use to paint and create my own clothes, I played soccer, basketball, ran track, cheer-leading and my favorite was being in AFJROTC. I went to the University of Missouri to major in Computer Science and I’ve always been into Tech. I started shooting videos and doing photography in college. I moved to LA  with my best friend to pursue a career in production and now I’m here.

How long have you been in the film-making industry, and why did you choose to pursue film-making/photography?

I’ve been in the film making industry for about 3 years. I’ve always shot video and photos even while in college,but I didn’t start doing it professionally until I moved to LA. I don’t think I chose film making and photography, honestly it chose me. I’ve always been interested in it and I believe that it’s my calling. It’s always been natural to me. It’s truly my gift. I realized that when I went to college for Engineering and ended up changing my major to communications after failing out of the engineering school, my friend recommended that I get into a college that would cater to my passion and that’s when I went into communications.

Not only are you a filmmaker and photographer, but you are the co-founder of a creative agency, LoreneJanae. Can you share with us how this business venture began?

LoreneJanae began when me and my best friend were in college. She is a makeup artist back in Missouri and we started a photography company shooting families, senior photos and such. We started LoreneJanae, because her middle name is Lorene and my middle name is Janae. When we moved to LA to pursue our company we expanded the mission to include makeup, videography and photography focusing on highlighting the beauty of black women. 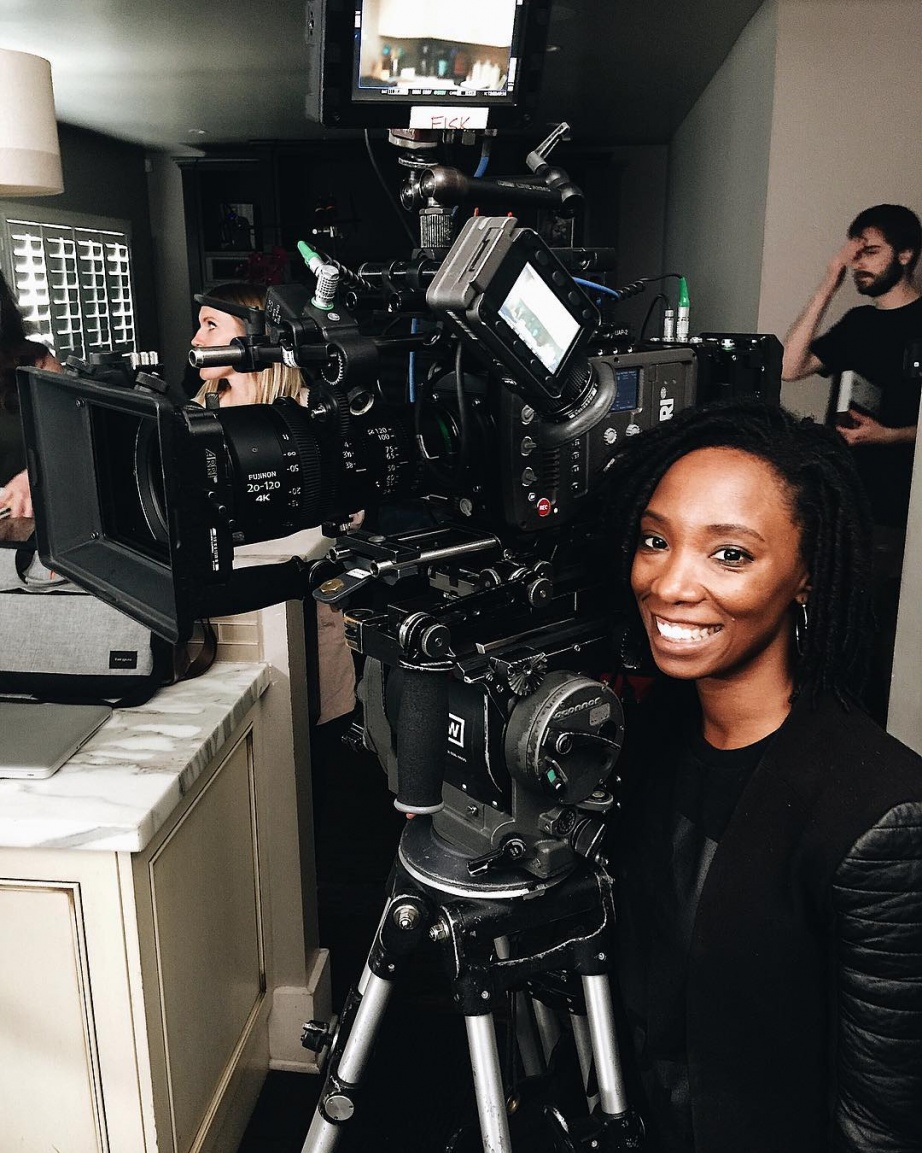 Who are some of your influences that have helped you develop your style and continue perfecting your craft?

A lot of my influences that have helped me develop my style came from just companies that inspired me through their commercials and videos. I love telling stories, so brands that tell stories in emotional and beautiful ways motivate me to do the same. As well as women who are making a statement in the industry already like Joi McMillion, Regina King, Ava Duvernay, and Rachel Morrison.  Also, I think what influenced me the most is other women that are inspired by me. They inspire me to continue to perfect my craft. I never want to feel like I’ve learned it all. My best friend makes sure that I’m always getting better. I’ve always just been inspired by the women and people around me.

Diverse representation in the creative field is important. It’s rather refreshing to see diversity celebrated and you’ve made it your mission to spread awareness that black women are “here and alive!” How have you combated the stigma of being a black woman in this industry?

I’ve combated the stigma of being a black woman in this industry by honestly not giving up. Being bold in who I am as a black woman in this industry. Every set that I go on is not as diverse as I would like and making sure that I can be the best I can be and produce my best, so that people don't judge the book by its cover means a lot. I’m very petite and a lot of people look at me like what can she do. But, when they see that I wear many hats and they see the outcome of my hard work, it makes me feel good to shut that thought down. I love meeting people and working with everyone so I make sure that I show through my art that I deserve to be here just as much as anyone else. My art has opened doors for me. Staying resilient and diligent in my craft has put me in rooms with people I never thought I would be in rooms with.

How do you distinguish yourself as a creative?

I distinguish myself as a creative by focusing on my purpose. I think it gets hard when there are many filmmakers, and many photographers, but as long as I focus on my calling and my purpose and my path then I’m good. I have to make sure I’m not trying to be anyone else but me and that has gotten me far. I love being personable with people instead of that influencer that cares about followers, but don’t connect with the people that follow them. My Midwest style has distinguished me, because I grew up learning how to work with what I had and I still do. People respect that about me. That I can use the most basic gear to create the most beautiful story. 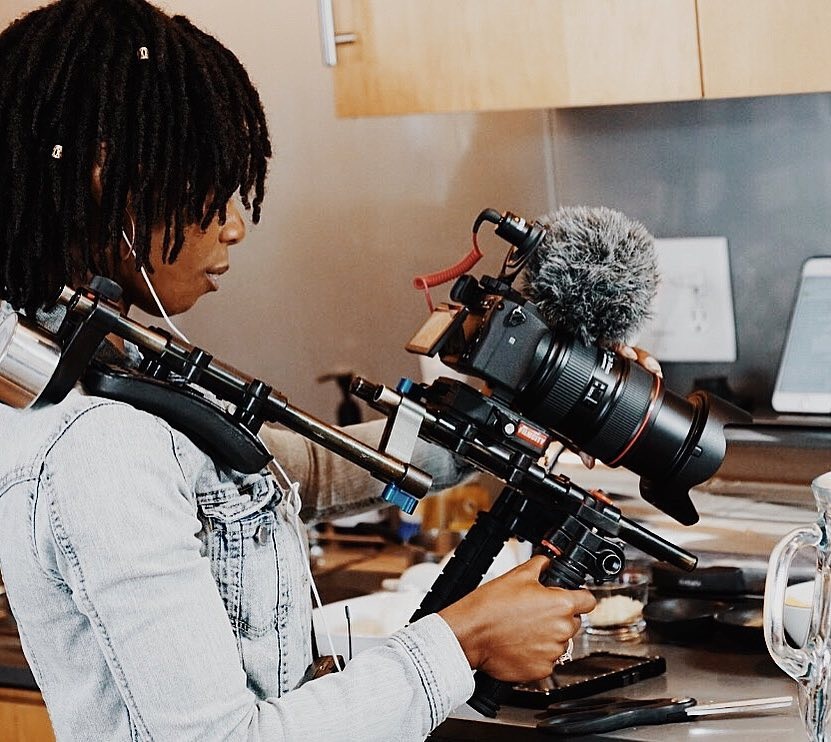 Advice I would give a black woman interested in pursuing a creative field is to focus on themselves. Everyone's path is different, so just accept their path. It may be slower, it may not happen the way you want, but to just stay the course no matter what. To create everyday even if it’s for yourself. If you care more about what other people think of your art you will never grow as an artist. Advice I would give my younger self is to explore. Explore what you like and who you are. The world is your canvas. Never let people put you in a box, you can do whatever it is you put your mind to, truly.

I’ve seen you work with some HUGE names in Hollywood, as well as prominent influencers and bloggers. What have been some of your favorite projects to work on and why?

My favorite projects to work on was one with Jussie Smollett. He was so sweet. The atmosphere, the whole shoot was amazing and uplifting. He’s such a creative soul. I also loved working with Tiffany Haddish. She is the same person on camera that you see in real life. FUNNY. I like those two because those videos came from an all black crew and I was able to pick other black women to be apart. My most favorite was with Kahlana, because she always challenges me to be creative in my edits which I respect. 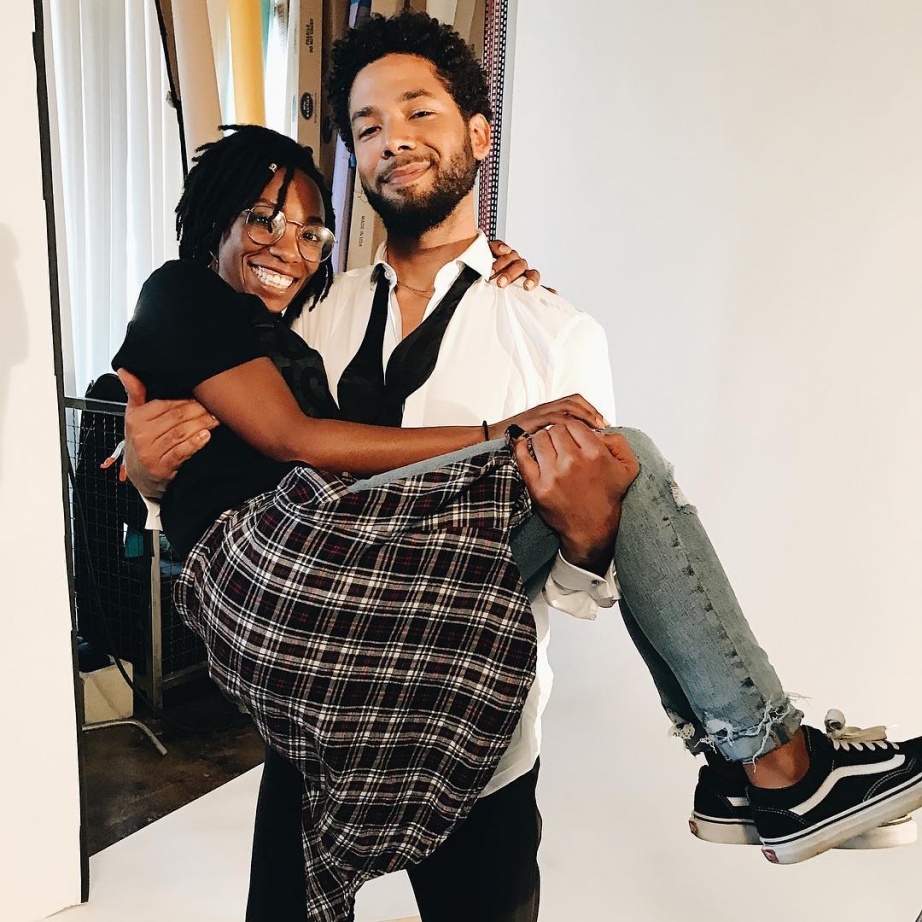 Brittney pictured with singer and actor Jussie Smollett via Instagram[/caption]

What resources would you share with other creatives, either photographers or filmmakers, to help them move forward in their endeavors?

I think the best resource would be YouTube. I learned everything I know through YouTube and practice. But to make sure that YouTube doesn’t cap your creativity. A lot of people go on YouTube and learn and stop there, but it’s more than that it’s YouTube, and hours and hours of practice and failing and practicing again.

What gear are you currently shooting with? What are your camera bag must-haves?

Gear that I have been shooting with lately is the Sony a7iii. I just purchased the camera, but before that I was using a Sony a6300 and I have a Canon 5d Mark III.  I shot all of my work thus far with my Sony a6300. I use Canon lenses and a Sigma 18-35mm and I still use my Canon for photography. I think my must have is just a camera, my rode mic and my 18-35mm lens. I try to teach people that you don’t need all this equipment to create as long as I have the basics I’m okay!

What does the future hold for you? 6 months, a year, or even 5 years from now, what are you hoping to accomplish in your career?

I don’t know what the future holds. I try to think about it, but it’s hard when God is in control. You never know how and what he’s going to do with you! First, I was doing more photography, then I did more shooting and now I’m doing more video editing. But, if I had a say I would want to be international with my work, creating commercials working with bigger brands. I would love to start teaching film in high schools or the basics of film making and editing and have my own production company!  I also want to own some property. My biggest thing I want to accomplish is creating a film and entering it into a festival. I just want to create black girl magic! But, my future is endless and I don’t want to box it.

Brittney is a photographer, videographer and video editor living in Los Angeles, CA. She is the Co-Founder of LoreneJanae , a makeup and photography agency highlighting women of color. Brittney's passion stems from the desire to tell compelling and captivating stories. She believes that the beauty in everyone derives from their story and her goal is to show that through her gift of photo and video. She focuses on creating digital branded content for influencers as well as small independent companies. Her work has aired digitally on TV One and more, and she has been able to work with influencers such as Tiffany Haddish, Eve, Common, and Snoop Dogg and more. What makes Brittney so unique is her clean aesthetic and her eye for capturing in such an emotional and powerful way. Website: www.BrittneyJanae.com Youtube: www.youtube.com/brittneyjanae